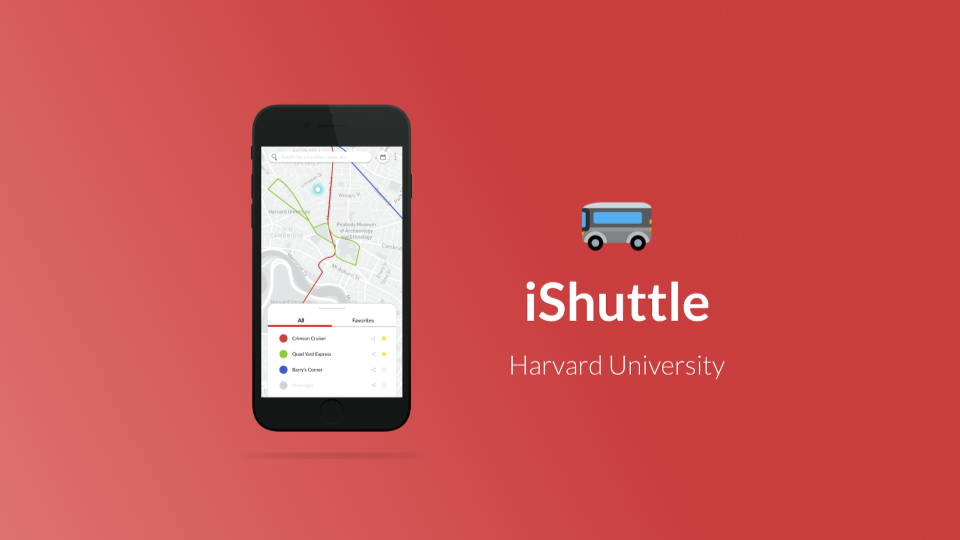 As college students, the interface of a shuttle app is both familiar and relevant to us. The emotions, however, are often overwhelmingly negative – confusion, frustration, etc. Therefore, we embarked on a journey to redesign the shuttle tracker into one that was clear, engaging, and could transform the entire experience of using a shuttle into a positive one.

To begin, we identified several major pain points that users experienced with the current [3] Harvard shuttle trackers. For clarity, we can divide these points into several categories: 1) a mismatch between expected shuttle arrival or performance and reality, 2) the inability to find directions given unfamiliarity with the shuttle system, 3) the existence of an outdated, unappealing interface that was both difficult to navigate and which tended to bury features, and 4) a miscellaneous category of various features that we felt the shuttle tracker lacked.

With regards to the first problem category, we realized that the largest frustration students encountered was that the shuttles were frequently off-schedule and, more importantly, that the trackers did not effectively communicate the details of delays/early arrivals accurately, effectively rendering the tracking app useless. It was therefore extremely important for us to maintain an accurate two way communication system between students and our app via a feedback form.

In terms of the second category, we realized that many students only used the shuttle occasionally, and were therefore unfamiliar with routes and stops. In these scenarios, the current trackers make it difficult to determine which of the routes and stops should be used in a given itinerary. Given a student that might only know the starting and ending destinations of his/her journey, we needed our app to be able to easily help them explore the possibilities and determine which route and stops to use.

The third category is generally concerned with more superficial aspects of the apps; however, the current trackers have such cluttered and unintuitive interfaces that it severely impedes the use of the actual functions. Features are often hidden in long lists, users often need to click through too many screens to reach their goal, routes blend together, and it can be difficult if not impossible to determine the direction of the shuttle along the route.

Finally, we also realized that the current tracking apps were missing several important features. The existing apps are not accessible for color-impaired users, which on average is experienced by 1 in 12 men and 1 in 200 women. Additionally, certain resources such as campus evening vans are not found in these apps, despite their essential role in maintaining campus safety.

After sorting through the problems, it became clear that the shuttle needed to be designed with two different types of users in mind. The first group includes students who use shuttles regularly. These students generally know where they need to go, where they are leaving from, and which shuttle line to take. For this group, then, it is most important to have an app that tracks accurately with an interface that is clear and quick to navigate.

The second group of users is composed of students who use the shuttle infrequently. They are unfamiliar with the shuttle lines, stops, and schedules, and therefore need the app to inform them how to navigate from point A to point B with as little input from them as possible.

With these two users in mind, we began brainstorming aspects of the app that we needed to redesign in order to re-engage our audience.

To start, we reinvisioned the presentation of routes on the interface. As trackers are largely visual apps, we decided to design the map in grayscale to allow the colored routes to be more easily distinguishable. On the home screen, users can choose to view either all routes simultaneously or only their favorited routes, which accelerates the tracking process for regular shuttle users. Students can further filter routes by selecting one or more routes in the bottom panel. Upon selection, the live shuttles and the stops are shown. Users can then click on a stop to show corresponding details about arrival time. Because it can be frustrating for students to have to continuously check back on shuttle status, we also added a notification button for each stop which, if selected, can notify the student when the shuttle is near (students can edit the time frame for notifications in preferences).

As mentioned earlier, the second major group of users is often unfamiliar with the shuttle routes, and therefore needs to be able to discover the correct route and stops easily using the app. To reach this goal, we designed two methods for the user. The first involves the search bar, through which a user can search for a route or stop, in which case the correct match will appear, or they can search for a specific address, in which case a pin will be dropped and nearby stops and routes will be shown. The other method involves finding the physical location of the destination on the map, and then double tapping to manually drop a pin. Similarly to above, the nearby routes and stops will be shown, and the user can then determine which options best fit his/her itinerary.

Another major feature we designed was the inclusion of a personal shuttle schedule. Users can import events that require the use of a shuttle from their personal calendars, in which case a shuttle event will automatically be generated with the best fit shuttle based on time, destination, and starting point. Otherwise, a user can also choose to manually enter a shuttle into their schedule. Once entered, users can choose to receive notifications for these shuttles near arrival time.

Our team also determined that it was necessary for students to be able to communicate with the shuttle managers to create a foundation of feedback that could be used to improve the overall system. In the current system, the shuttles are meant to run based on a set schedule, trackers tell the students when the shuttles should be coming, and the students are either satisfied or [more often] unsatisfied without the ability to voice their frustrations. Therefore, we’ve designed several levels of feedback. The first is inherently built into the scheduling system – by having students schedule in their shuttles, shuttle operators can aggregate this data to better understand when they might need to provide more shuttles or more frequent shuttles. The second layer involves quick, direct feedback from students – in scenarios where the app determines the student has taken a shuttle, the app asks users whether or not the shuttle arrived on time using a thumbs up/down interface, which provides feedback for the quality of shuttle arrivals relative to expected times. Beyond that, we’ve also given students the opportunity to provide more detailed comments or concerns using a written feedback form.

Finally, our team also included a number of miscellaneous features that we felt could substantially improve the app. The first change made here was to add an accessibility filter for color-impaired users. Textured lines and colors with wider variance are shown in the scenario that the filter is turned on to prevent confusion between close or overlapping lines. The other feature we added was the ability to easily schedule an evening van after a certain time in the evening. Campus evening vans are an important aspect of maintaining both actual and perceived safety, and we therefore felt that it was necessary to make this service much more easily accessible than it is in its current situation, where students must navigate to a separate website, find the number associated with evening vans, and call and schedule in real time for a van. Instead, our feature allows students to request a van directly through the app immediately and in advance to minimize evening waiting time.

Through careful consideration of our users and their needs, we redesigned the existing shuttle tracker into an experience that is both easy and pleasurable to use. iShuttle engages users through its clean, efficient, and accurate interface and provides a number of additional features that transform the tracker into a tool fit for frequent, recurring use.

iShuttle optimizes for the sensations described in Don Norman’s Emotional Design. Ideo-pleasure stimulates users through the enhancement of their senses of self through the product. iShuttle allows the user to schedule their eventual bus ride in accordance with their own calendar. The user enters the time they would like to arrive at their destination by or leave from their origin stop by and iShuttle offers them routes optimized for their needs. The user then selects a route that fits their schedule and embarks. Throughout the journey the tracker is then mindful of the user’s schedule which allows the user to see themself in the product.

The shuttle tracker app also facilitates socio-pleasure in that it enables users to coordinate travel schedules. Once a user has found a route they would like to take, they are able to share that route with a fellow traveler. The second user, having received the route from the original user, then is able to start the same journey on their own device. This ensures that both users are receiving notifications about when the shuttle is approaching the origin stop, when there might be delays, and when their destination stop is upcoming. By coordinating schedules and alert systems, iShuttle relieves social stresses and facilitates a shared experience.

iShuttle is further meant to facilitate physio-pleasure and the behavioral facets of Don Norman’s emotional design. The application features an emoji-based quick feedback form wherein the user indicates whether their shuttle came on time or not. The emoji-based buttons are meant to be engaging for the user, and the selection is designed to gamify the experience. Furthermore, immediately after making their quick selection, the user is thanked with a message explaining that their feedback helps other riders. This reinforcement is both meant to appeal to the user behavioral, and to provide an ideo-pleasure in this message of validation.

Having carefully considered our users and the concepts that design for sustained engagement, we believe that our redesigned shuttle app has the potential to reverse the frustration associated with boarding a shuttle into a swift, painless, and even enjoyable experience. 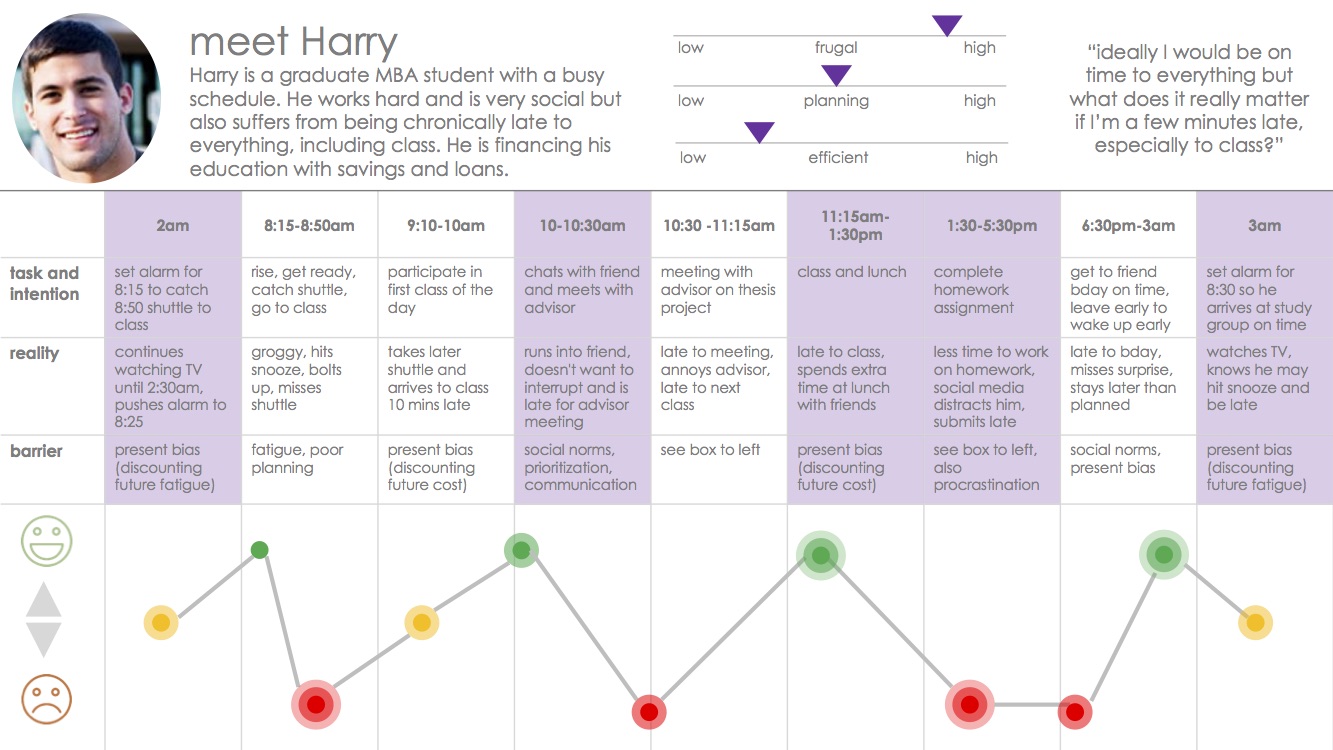 Challenge Half on Behalf of my Better Half