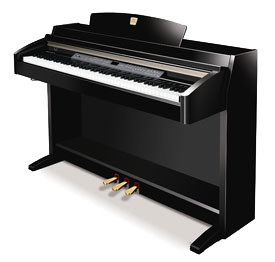 Freshman year, myself and my roommates were the fortunate
recipients of one of the freshman piano “grants,” which meant we had a
clavinova in our dorm all year round. While most people would prefer to play on
an actual piano (myself included), clavinovas offer a few key benefits that
make them perfect for dorms.

The first, and biggest benefit, is that they are electronic,
and can thus be silenced via headphones so that the player doesn’t disturb
those around them. Moreover, this allows one to hook them up to music
composition programs, something obviously impossible to do with a real piano.

The second benefit is that the clavinova takes up
dramatically less space than even an upright piano might require. They are
lighter and easier to move around or up stairs, providing one with more
flexibility of placement.

Thirdly, Clavinovas also cost less than actual pianos (in
most cases), so one can get the ability to play piano without having to pay an
exorbitant price.

The design of most higher-end Clavinovas also takes into
account their stated purpose: to mimic a piano. The keys are weighted to feel
like a real piano’s hammers (rather than the cheap weightless plastic keys of a
keyboard), the pedals have the same functionality, and much effort has gone
into the sound-producing software to mimic a real piano.

Though I haven’t had the opportunity to play one frequently
since freshman year, as I’m looking for a way to keep playing piano this summer
while living in a temporary apartment, renting a clavinova seems a favorable option.

What I’ve Got: Digital Streaming