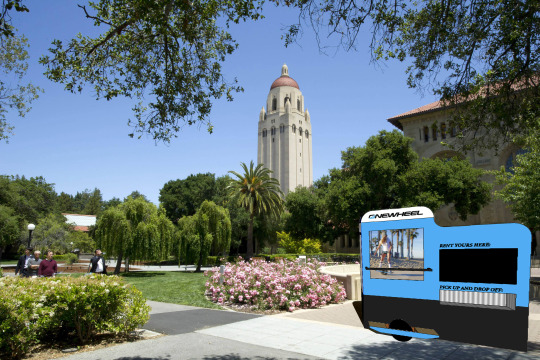 Onewheel is looking to expand its user base, and this challenge focused on how to capture more of the female market – specifically, how to convert women users from people who try it to people who buy it. We began this exploration by considering two critical pieces of information:

This led us to pursue the following strategy: in order to increase female ridership, we need to increase the presence of Onewheels around female riders, such that the group effect can encourage women to move beyond the trial phase. With this in mind, we settled on designing Onewheel Campus, a subscription based rental program for Onewheels, where users could conveniently travel across campuses without needing to be responsible for the board between stops. A campus setting is a strong beachhead market for this type of program due to the increased likelihood for young people to adopt a new technology, the strong collective action effects that occur with so many people living in close quarters, and the success of similar bike rental programs on campuses across the country. One can think of it as “Hubway for Onewheels.”

Next we generated a list of questions and pain points that most users face when considering a new mode of transportation. The ones that we determined to be particularly salient for women are in bold:

This helped us generate the profile of a user, Katie, for whom we wanted to design our program. Katie is a 20-year-old college student, athletic (but not an varsity athlete), who is always on the go. She books her schedule tightly, and there is not much time between classes, extracurriculars, and doing her work. Katie needs a way to safely and rapidly move across campus to her various activities, and not be burdened by having to transport any physical transportation equipment with her once she arrives at a stop.

With this in mind, we developed a unique Onewheel Station, which we would recommend placing at several key locations across a campus. These stations wold be complete with:

These stations are designed to facilitate an easy grab-n-go model of board sharing. We recommend implementing a subscription plan, as college students are unlikely to spend $1500 on a new transportation device that will beunproven to them as a useful tool for the first several rides. The primary problems experienced by women (safety, weight of carrying it around) are also issues for men as well; addressing them with a transportation sharing program is a solution that helps everyone.

We propose implementing a Onewheel campus program at a west coast campus initially. Warm weather, large distances between buildings, and relatively flat terrain make Stanford an exemplar for such a choice. Students are busy, and need to traverse very large distances in short amounts of time there. Additionally, the temperate weather at a west coast campus reduces the concerns that inevitably arise with riding a Onewheel in rougher conditions, or with bulky coats and boots. Women’s warm weather clothing in particular is much more conducive to riding.

A rollout would involve constructing several Onewheel stations across campus, hiring a few campus managers (expert student riders who could lead group training sessions and commutes), and instantiating a free ridership program, where the first several rides for a new user are free, to get them comfortable with the idea of using Onewheel. Onewheel is not suffering from a lack of “cool”, but a lack of “comfort.” We hope to lower that barrier by creating an environment in which all students build off of each other’s joint exposure to Onewheel, and that the internal network effects of a campus can encourage many more users to become full-time riders. We expect that female riders will be hugely positively affected by such a program, and that the college campus can be a model for later efforts in the professional commute. What I’ve Got: Lytro

What I’ve Got: The Fletcher Capstan Table What I’ve Got: Clear